In total, The Edge Shooting Institute (TESI) provides approximately 18 standard training courses, which is applicable to the person whom has never touched a firearm to advanced SWAT / Anti-Terrorism / Hostage release teams, call it what you like.

Once you have downloaded the Module file below you will be able to select the training courses you are interested and build your training experience with us.

As an example, you might choose modules 1A, 1B, 2 and 3 and coupled that with the Sodwana Diving option, which will give you a total of 14 days to complete your training courses and holiday experience.

This will give us a structure to work around as we understand that one needs to be flexible and that the clients requirements might change.

Please feel free to contact us if you want to learn any tactical / firearm / self-defense skills which are not shown in our module file.

Finalizing your training experience with The Edge Shooting Institute Courses will be a interactive approach between ourselves and our client to ensure we address the clients unique needs and wants.

Contact Us now for more details about our training courses

Fundamentals win the fight. It is not your gear, nor what you are wearing that will get you out alive. The basic shoot will teach you the fundamentals of marksmanship, which will allow you to put your shots on target.

So get this: The important things in a gunfight are:

As you get more advanced (see the other modules) you will start to work in teams. Chances are that you will not be alone when you are in a gunfight fighting for your life.

You might be with your friends and family, in a shopping mall or in our case, just be in South Africa. This requires that you handle your weapon in a safe manner. We will teach you the safety aspects of firearm handling, which is practical.

Sport Shooters reading this, BEWARE. We don’t participate in a sport, nor is this a game. This is real life, where the winner lives and the looser dies.

We will push the boundaries, but still be safe.

The sniper courses (Basic and Advanced) have two target (pun intended) groups that will benefit from the teaching. They are hunters and law enforcement / military agencies.

The aim of the sniper course is to teach the student to make effective long range shots with a rifle designed for that purpose. It consists however more than the mere marksmanship that we see on YouTube videos. The would-be sniper needs to master three subjects to ensure he is a well-rounded sniper. These fields are:

The basic course will focus on marksmanship, as the overall result is still measured in putting a bullet on the intended point of aim, regardless of the conditions of the shooter.

The advanced course focuses on the field craft and tactical aspects. This includes subjects like walk and stalk, camouflage, hide selection etc. which is as applicable to the hunter as to the sniper task with a hostage situation.

Leo (HK) Prinsloo served 17 years in the South African Police Service. Twelve of these years were spend in the SAPS Special task force unit. This is a counter terrorism unit. Mr. Prinsloo served this unit not only as an operator but also as an elite marksman (sniper). He was known for his deadly accuracy will all types of long guns.

Please note that the training provided is very specific and specialized. We will therefore verify each participant’s bona fide’s as we do not want to teach people who intent to use the knowledge and expertise for evil purposes.

Please contact TESI for a complete description of the course

“Vasbyt” is an Afrikaans word, which can be translated as biting down with your teeth, especially when the going gets tough. Contrary to belief that it is a system that is designed just to break down recruits, it is a rich area of personal learning for everybody. The recruits might not think of it like that at the time, but a “Vasbyt” gives you a wealth of information of the team and individuals when they are way out of their comfort zone!

Loosely translated the phrase means that you cannot separate mental toughness from physical toughness. When the chips are down as the Cowboys would say, you need people whom are mental and physical tough.

Remember, winners live and losers die in a gunfight and we want to prepare people for a violent attack on them whether it be a gun fight, knife fight, riots whatever.

So what does a “Vasbyt” comprise of? It is a mixture of physical activity to get you dog tired, sleep deprivation and other exercises / being exposed to conditions based on the instructors imagination.

You will be pushed outside your comfort zone, which will show in your mathematical ability to do simple arithmetic. Just have a look at this opening scene from “Lone Survivor”: https://www.youtube.com/watch?v=0L6R2Ok6tHc
If you think it’s in you or if you want to know if your team has what it takes, come and do a “Vasbyt”.

You will find here at “The Edge” that we do not expect anything from a recruit / student, which we are fully prepare to do or undergo ourselves. You will therefore always have a instructor with the team suffering along and feeling the same hardship as each student / recruit.

This course is aimed at anybody that might find themselves in a hostile environment and wants to prevent himself / herself to become a victim or statistic. Unfortunately if you read the news you can come to the conclusion that the whole world is a hostile environment. This course is just as applicable to Europe as it is to war zones like Syria, DRC, Afghanistan etc. take your pick.

This course is basically an introduction of some of the other modules and its main aim is to prevent you from falling victim (read avoidance via awareness), creating an escape opportunity using basic defense techniques and what to do to survive if you are taken hostage etc.

The curriculum is as follows:

If you ever drive a motor vehicle, you will benefit from this course. Due to the advances in technology in motor alarm and security hi-jacking will increase in the near future. This implies that your risk of being hijacked will increase.

One of the main aims of the course is to teach the student to understand that the motor vehicle is his / her primary weapon and then to utilise the motor vehicle as a weapon. We focus also on situational awareness and also shooting from the vehicle

One important aspect that distinguishes our course from the most of the courses on the market is the philosophy that we follow regarding behavior during such a incident. Handing over your vehicle to the hi-jacker is indeed a option, but we see it as the last option, where most anti-hijack courses teaches you only this option, i.e. no option of avoidance, discourage or defend.

If you want to learn self-defense, this is the course

for you. It is a make-up from modules 17 and 18 and will not only teach you the 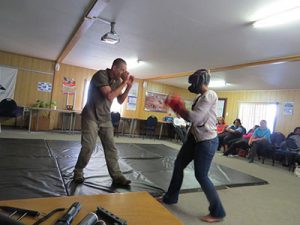 techniques but will also allow you to have the self-confidence to live a good life without the constant fear of being a victim. This module is designed for ordinary civilian citizens who realize that it is up to them to protect themselves and the ones they love against what is becoming increasingly a hostile world we live in.

The structure of our self-defense classes uses these modules as guideline but as usual we can modify the course to suite the laws in your country and / or the environment. i.e. “Don’t bring a knife to a gun fight”. If you are allowed to carry a firearm we will naturally pay more attention to weapons handling. We will however teach you how to use anything you can lay your hands on to be used as a weapon.

The final phase of this module includes some advanced driving allowing you to become comfortable and in a vehicle. We will push you to get yourself outside your comfort zone while still ensuring safety comes first. At the end of the advanced driving section you will be astonished what you can achieve behind the steering wheel of a vehicle. This is in our opinion essential self defense training!!!!